Here's an image of Pepper, the poodle with an attitude. 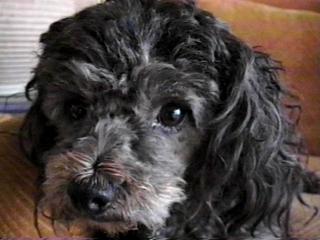 Little Pepper was born in February 8, 1993, and is ALL DOG. You'd think a little girl poodle would be nothing but frills and squeaks but not this one! I found that out the day I saw a rat tail hanging from her mouth. When I pried her jaws open and pulled on the tail, out came a dead rat that had been halfway down her throat (ugh!) During the 'early years' I wasn't sure if this bundle of mischief was going to work out but she eventually turned into a very smart and loving pet. And, she makes a great little watchdog!

Ok, take me back to Mike's Home Page!